I would love to see our labor code amended, to provide a better balance between labor and capital and to foster growth for our small and medium businesses.

I believe it follows that if we have enough businesses and industries which are developed, then the market for our labor force will automatically determine what is right for our workers. Rather than the current inflationary policy of our government's labor laws.

If the minimum wages were raised for that period, it would mean higher costs for our producers/manufacturers, retailers or our businesses in general, which would then mean higher costs of basic necessities for our national consumers and that even if oil prices or food prices were to significantly go down, it cannot be denied that labor costs would continue to stay at a higher rate based on higher prices.

Although, this would entail more spending power for our consumers, this would in fact prevent the overall purchasing power of our peso from increasing as the prices of basic necessities are barred from further decreasing due to the limit set by our minimum wage.

This is not the only observation I have had with this law, however, there are still some other issues which I hope somebody else could point out to me = )

What do you guys think?
posted by AMR 6 comments:

THE SCRIPT LIVE IN MANILA 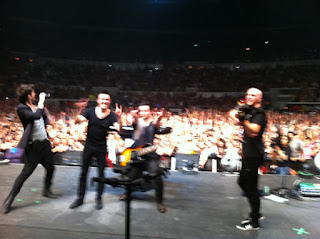 a three-man Irish band.
is markedly different from the other artists.
Their lyrics play on a range of emotions, from plaintive and positively melancholic,
to hopeful and optimistic.
The singer's wonderful voice tugged at my heartstrings.