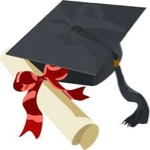 On graduation day, there is such an explosion of emotions all around: excitement of the graduate, who after four or five years of examinations, term paper, graded recitation, thesis presentation, cannot but have that feeling of exhilaration for having survived all these. There is the feeling of joy of the parents, for having successfully guided their child to this day, where so many other parents fail. There is the feeling of delight of the teachers, for having participated in the learning process of an individual, perhaps, changing the very course of his student's life.

But after all the din of the celebration dies down, the graduate looks at himself and asks: What next? This is how the real world; I am on my own now. I have to start moving toward success.
What is your definition of success? Many will say a high paying job, a car, a beautiful house in an exclusive subdivision. And if you don't get these things, do you consider yourself a failure? Many people define success as the opposite of failure, but as one commencement speaker said: "Success is not the opposite of failure. It is an integral part of failure" Which means that in life, if there is an important thing you want but you fail to achieve it after several attempts, don't give up. Determination, a firm resolve - keep going, until success happens.
There is no reason for you to allow fear to get in your way. As Nelson Mandela has said: "Education is the most powerful weapon which you can use to change the world".
Congratulation Graduates!
posted by AMR