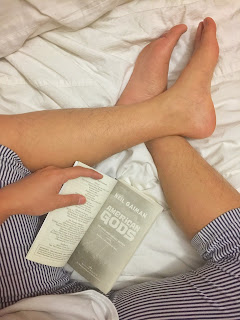 Neil Gaiman's American Gods This is one of those books that you simply cannot read in one sitting; there’s simply too many layers to take in, to think over, to enjoy it to the full.

It took me two months, almost, of reading to finally complete the book, not because I found anything undesirable, but because there was this assumption that somewhere, hidden in those pages, all the secrets of the universe waited to be discovered.

I know. It’s senseless to think a fictional tale about gods would hold the answers to everything, but that’s exactly how it felt at times. The work of a master wordsmith or… maybe the work of a guardian who holds the universe’s mysteries?

This book, which traces on a variety of subjects, is possibly one of the greatest literary work of art of the modern era. It is relevant, contemporary, somewhat relatable, and it delves into the human mind on more than one occasion.

Yes, some may find the work difficult to understand, or struggle to see past the religious figures who grace the pages of American Gods, but there is something incredibly important about the story.

But American Gods isn’t for everyone. I guess.

Over all, it's an EPIC novel.

And I am so excited to watch the TV series adaptation of the book.