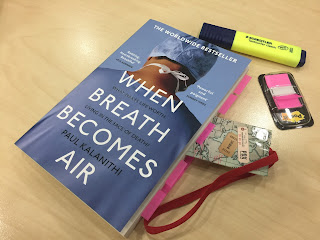 Paul Kalanithi When Breath Becomes Air was possibly one of the most profound and heart-breaking autobiographies I have read.

Talking about death, reading about dying, writing about it, is not easy.  As a doctor, Paul Kalanithi was confronted with death constantly, and reading his narrative history are jarring; the cases he’s dealt with are at times disturbing. The man is a saint for doing what he did for so many years. He’s the doctor you’d wish you could have when, or if, you need it.

Through this book Paul Kalanithi proves that he is more than just a talented surgeon. He is an exceptionally talented writer. His words are deep, philosophical, and penetrating, showing the world from his perspective in a way that is full of honesty and perplexity. He spent his life searching for a deeper meaning, both figuratively and literally, through the study of scripture and literature and the study and practice of medicine.

“I was driven less by achievement than by trying to understand, in earnest: What makes human life meaningful? I still felt literature provided the best account of the life of the mind, while neuroscience laid down the most elegant rules of the brain”


This is a powerful and moving book but is not for the squeamish. He writes reliably about his time as a medical student, and later as a neurosurgeon. He tells about the first cadaver he ever worked on, the studying of organs. He describes what was left inside the stomachs of those who died before their last meals, pills, were digested. He says that many medical students change their course of study by about their fourth year of medical school, would rather to work in lifestyle areas such as radiology. But Paul Kalanithi chose neurosurgery.


Death is inevitable, but when will we die? 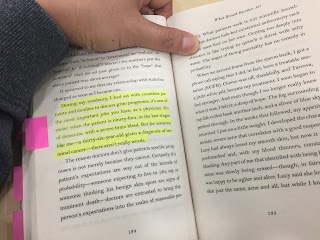 With no way of knowing how much time he had left, Paul Kalanithi was at a loss for how to spend what very valuable time he had. His doctors had no way of providing him a solid time frame because it was impossible to determine how his cancer would change with various treatment plans. His wife Lucy had recently given birth to their daughter, who brought new life and happiness to their lives and the lives of their families.

Paul Kalanithi eventually spent his last days in writing. Once they learned that his cancer had spread to his brain, it was all a matter of writing as much as he could as fast as he could while he still kept the mental clarity to do so.

“This book carries the urgency of racing against time, of having important things to say. Paul confronted death – examined it, wrestled with it, accepted it – as a physician and a patient. He wanted to help people understand death and face their mortality. Dying in one’s fourth decade is unusual now, but dying is not”


Death is not, in fact, unusual. It is the abruptness of being faced with it when we least expect it that is hardest to understand. And yet, Paul Kalanithi faced his death with strength. 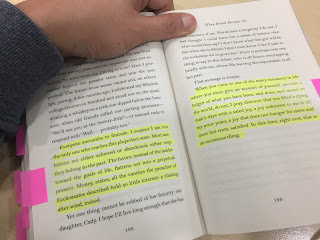 Paul Kalanithi has given so much of himself in this book, he’s encouraged us to live meaningfully, and that we can effectively conquer the fear of death. There is nothing that can surmise this memoir better than his words himself.